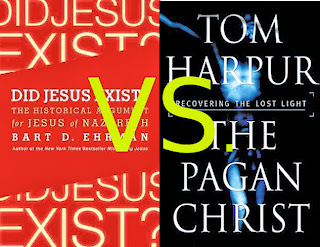 When Bart Ehrman’s Did Jesus Exist?: The Historical Argument for Jesus of Nazareth

hit the shelves last year, he encountered considerable criticism from several scholars. This was the result of a long-standing debate between two groups: the historicists and the mythicists.

The historicists (which includes Ehrman) believe that Jesus was an historical figure about whom the gospels were written. This is not to say that the gospels were meant to be historical records of his life in the way that we think of historical biographies today. For some, such as John Shelby Spong (Rescuing the Bible from Fundamentalism: A Bishop Rethinks this Meaning of Scripture), the gospels are a form of midrash (theological interpretations) for the liturgical year. Many of the sayings and stories were passed down through an oral history preserved by the communities. Even if the words recorded aren’t exact, are exaggerated, or are sometimes even made up, for historicists the material in the gospels points to a man who actually walked and talked on earth.

The mythicists argue differently. They reject that Jesus was an actual historical figure. Rather, the stories written about him are retellings of ancient and contemporary myths. For example, Tom Harpur in The Pagan Christ: Is Blind Faith Killing Christianity?

asserts that the stories about Jesus are basically ancient Egyptian myths in new packaging. This is not to say that the stories are “mere stories,” for a “myth” is no “mere story.” Myths are creative ways of speaking about the deepest depths of the universe. Harpur’s Jesus is a Cosmic Christ who is found beyond history, in all times and all places. Myths are about that which is ultimately true.

Does it really matter? Whether this scholarly argument matters with regards to faith depends on how one’s faith is constructed. If one comes from a more conservative evangelical or fundamentalist background, then what the mythicists write is dangerous. From their perspective, it is necessary for God to literally incarnate God’s-self into the historical Jesus as the Son of God. Only through the incarnation, death, and resurrection could the work of divine salvation happen. If there were no historical Jesus, their Christian religion would be based on a lie.

Other Christians, however, aren’t threatened by the possibility that Jesus may not have been an historical figure. They accept that the gospels are less about the historical Jesus and more about how early Christians believed that the Spirit of Christ continued to guide their communities. So, it’s not surprising that the Jesus stories addressed their current issues, not those of Jesus’ day. Because they don’t take the gospels literally, the historicity of events in the gospels is not important. The Christ of faith in the gospels is not the same as Jesus the Galileean of history.

I fall into the latter group. I find both groups promoting intriguing scholarship. I lean toward believing that Jesus existed (primarily because most scholars seem to), but I believe that the stories of his life were written in a way that incorporated cultural myths. It seems most likely to me that we have a combination of Jewish midrash and pagan myth making up this unique literary genre.

I’ve added a couple of videos below. The first is Bart Ehrman addressing his critics. And the second is Tom Harpur talking about his vision for Cosmic Christianity. I invite you to try to step outside of your current understandings for a little while and appreciate two radically different perspectives side by side. Even if one is difficult to accept, the scholarship can still be appreciated.