Imago Dei: Dog the Father, Dog the Son, and Cat the Hissing Spirit 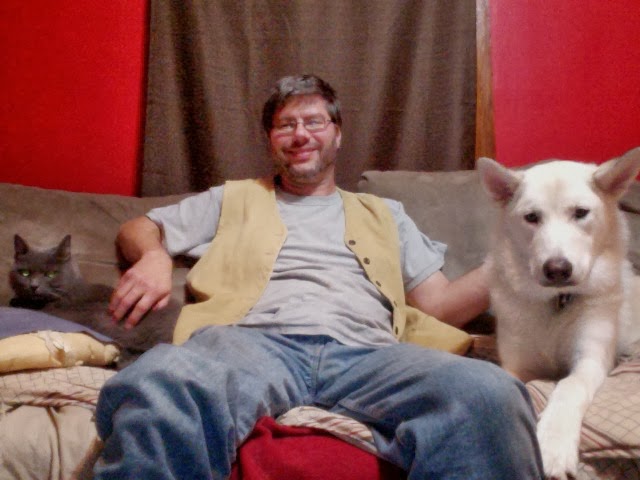 My household contains one cat, one human, and one dog. Three different species with three different personalities. As you may be able to imagine, it doesn’t always go well.

Annabelle, the cat: Eight years old now, she has always been anti-social. She doesn’t really want to be around anyone else but me, and she doesn’t like sharing. Over time, she can get to know someone, even get to the point of walking by and demanding affection. But this has happened with only a rare few. And, she still has her claws.

Loki, the dog: I say “dog,” but I should really say “puppy.” He still has his puppy energy, excitement, and curiosity. The Husky in him manifests a fierce will, and he wants what he wants when he wants it. He wants to play with everyone and everything. Above all, he wants to play with the kitty. He is also very jealous of my attention.

Me, the human: I’m their “daddy,” responsible for both of them. I want them both to have a full and abundant life in my household. Annabelle demands order and stability. Loki demands freedom of expression. I want a peace that doesn’t diminish either of them. And, I get tired and cranky.

Loki has been in the house for four months now. Up until then, Annabelle had me all to herself. There are rare moments when the two of them can be close. About two weeks ago we had a breakthrough. Loki and I were sitting on the couch. He dozed while I petted him (he was actually calm, believe it or not). Surprisingly, Annabelle jumped up with us. He didn’t notice at first. She crept slowly down the couch until she reached my side…cautious, very cautious. As she neared me, he realized what was happening, lifted his head, and looked at her. They both froze. Very quietly, I said, “leave it,” and he laid his head back down. She turned around and laid down beside me as well. This was the first time we actually had “family time together.” It was amazing.

Despite our breakthroughs, Loki still tries to play the Chase-the-Kitty Game whenever he gets the chance. He doesn’t always instigate it. Sometimes, it is accidentally started by her. He’ll walk right by Annabelle without even noticing. Then, she will hiss a warning at him from the side of the couch. Of course, he thinks this is an invitation to play and is more than willing to oblige. Thus it begins again.

I’ve tried hard to get them to bond. I’ve discovered that they have something in common: they both love Loki’s liver training treats. I now sit them down together regularly (we sit in a triangle on a folded up sleeping bag that they have both used as a bed), and I give them treats. If they become too fixated on each other, all I have to do is make a noise and hold up a treat. Suddenly, I have four interested eyes right on me, and we can continue. This is one of the ways we do our “family time.”

Family treat times are good times. Perhaps they are the most peaceful times in the house. Everybody sits inches away from everybody else. We all respect each other’s personal space. In that combined space, with those tidbits, we all experience something different. It is a time of sacred healing as we find we can trust one other. And slowly but surely, we are bonding. We are learning to get along over food.

I’m glad I was able to snap that picture of us all on the couch for the first time. That image is a vision of what could be the norm for the household. Visions are important. They remind us that what seems impossible today is really quite possible tomorrow. They give us hope when we want to throw in the towel.

For many Christians, the ultimate vision for human community is that of God as Trinity. Several years back, many evangelicals started re-emphasizing it. As they did, it wasn’t about “believing in” the Trinity. Rather, they highlighted it because it had great significance for their congregational life together.

For them, humanity was created to reflect the image of God (also known as the Imago Dei). To say that God is Father, Son, and Holy Spirit is to say that God is nothing less than Divine-Community-Flowing-with-Love. If a congregation professed that their God was the Triune God, then they needed to pattern their communal life around the self-giving love that animated their theology. Of course, Christian communities fell short of living out such a lofty vision, at least from time to time. But I suspect that they tried to embrace it as fully as they could when they held those little bread treats in their hands, sipping juice during Communion.

As for me, I’m really just trying to bring my household together. I long for a space in which the three of us can be our diverse selves without the chases and fights breaking out. I will continue to work toward a time when we can just be happy to be in each others’ presence. And I will continue to be thankful for those joyful times we share breaking up treats. As I proceed, I know that the Imago Dei is just as significant for the small situations as the global. Peace has to start somewhere. It might as well be over those morsels of training food in the house of dog the father, dog the son, and cat the hissing spirit.