Talking about Aikido with James over Coffee on Easter Sunday 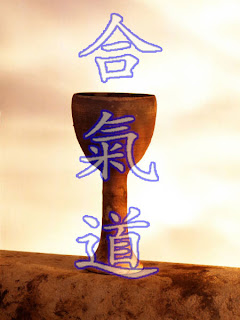 It’s Easter.  I did not go to a church.  I went to Aikdo class instead. For me, Aikido is a liturgical service in its own right.  After class on Sundays, we generally have coffee at Justin’s house.  Today, I was reminded that sometimes the best sermons just simply happen.

Nate started talking about the Letter of James.  In it, we hear that “faith without works is dead.”  To him it meant there was a difference between doing good things because you “should” and doing good things because that’s just who you are.  The quick dialogue between Justin and Nate brought up the concept of character.  Our character flows into our deeds.  Justin added to it, bringing up something that they had talked about earlier regarding Aikido: there is a difference between doing techniques and having technique.

According to James, the relationship between faith and works is much the same.  The equivalent of doing techniques is doing things because we “should.”  When our faith forms us, however, we stop going through the motions.  As we grow more fully into the spirit of Christ, which is the spirit of love, we are transformed from the inside out.  Our character changes.  We start to do good things because that’s just who we are.  We become agents of love because we can no longer do anything other.  Our loving works are external manifestations of our internal being.

As we continued to talk, I knew we were sharing in nothing less than a sermon, and a good one at that.  Insightful, poignant, and deeply relevant to spiritual life.

However, there was a second sermon in it all for me.  As the conversation continued, it turned to how Justin and I had been talking about that very same passage yesterday at Starbucks.

I pondered the strong and timely connection there.  What are the odds that I can have a random conversation with one friend on one day regarding a specific topic and passage, and the next day have another friend bring up the very same thing?  Some would say that this is the work of God in the midst of everyday life aligning events toward something greater.  The theological term for this happenstance is providence.  I have to admit, though, for the most part I prefer to think of life as a series of random, related chances.  I avoid reading too much into events, probably because such readings have become justification for so many evil acts in our world.  But, in moments like this I truly do feel the hand of God guiding and nurturing us, forming us together more fully into a people. It’s hard to think of it as mere chance.

Today, I felt as though we really were having coffee with James.  As we all shared our voices, his was an important one.  He said what he had to say to us, as did Nate, Justin, and myself.  We all spoke.  We all listened.  And perhaps we all grew as individuals.

But for me it was about more than that.  It was about being attentive to the Voice that calls to us from a depth beyond words.  It was about participating in the loving spirit that binds souls in a way that can’t easily be explained.  That second sermon reminded me of how much I find God in those around me.  Sometimes I feel a connection so deeply that it births a synchronicity I can only describe as divine providence. As I listened to Nate and Justin talk about how this is where they belonged, I was reminded of the extent to which I belonged there as well.  Today, I did not belong in a church. Rather, on this day, on the holiest of all days, I belonged there, with my friends and with my God, experiencing the holiest of communions.

Flesh of my flesh; bone of my bone.  Together, we listen deeply.  Together we rise to new heights. And then, heavily caffeinated, we scatter gracefully, while remaining knit as one.  Such is the Easter experience.  Thanks be to God.