Why Fundamentalism Deserves to be Treated Differently than other Religious Perspectives 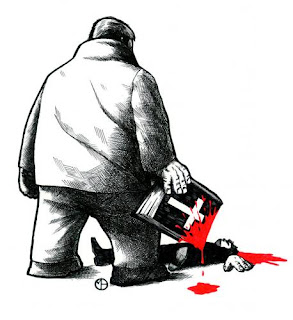 I have issues with Christian fundamentalism. I believe that fundamentalist “community” borderlines on a cult that is damaging to the moral and intellectual growth and wellbeing of adults as it promotes its imperialist ideology that is dangerous to wider society. I think I’ve made that clear before.
As a religious perspective, it has come under attack primarily as being “anti-intellectual.” Basically, that means that one has to turn one’s brain off at the door. Christian fundamentalists take a thousands-year-old text that is the product of various and conflicting manuscripts, and they turn it into this perfect book without error, for it alone has been given to us directly by none other than God Himself. Ridiculous belief? Absolutely. And anyone who is willing to turn their brain on for a short spell would see that quickly enough.
Still, is ridiculous relative? I think it is. There are many things people in this world hold to be true that I say are ridiculous. There are many things that I believe that others think are ridiculous. I want to look at something that many people place high on the ridiculous list to see why fundamentalism is different. Let’s look at a belief in magic(k).
Recently, I’ve been reading a book on druidry. In short, druids believe that the world in which we live is filled with magic. Magic is life. By participating in their system of magic, they influence the world around them. Since we don’t have a lot of scientific proof (if any) to back up such claims, many “reasonable people” scoff at the idea of tapping into the power of the universe by practicing magic as unreasonable.
Despite my emphasis on reason, oddly enough, I don’t count myself among the ranks of that reasonable crowd. I believe there are many ways to interpret one’s spiritual experience. Indeed, in part I share the druids’ worldview that perceives the universe as magical and mysterious as well as scientific and rational. So, despite the lack of evidence supporting the claims of druidry, I don’t have any issue with the perspective. I don’t even know that I would have an issue with it if there were scientific evidence debunking it.
So, why a I willing to accept the “unreasonability” of druidry and not the “unreasnability” of fundamentalism?
I realized finally that it has less to do with whether the ideology is reasonable, and has a lot more to do with how the kind of world the ideology promotes.
Druids don’t seem to have a problem making room for others in this world. Indeed, pagans in general promote a plurality of perspectives within the pagan framework. To my knowledge, they are not seeking power in order to impose their tyrannical ideology upon others without question. They take the healthy, adult stance that says, “I see and experience it this way, but that doesn’t mean you have to see and experience it the same way.”
Fundamentalism takes us in a 180-degree direction. On a personal level, it damages human beings by placing a cap on their personal development; it forces them to remain in a place where they process the world on the moral level of a 10-year old. On a societal level, it is dangerous when it acquires political power. Look no further than the legal push to eventually replace scientific evolution with the downright ignorant creationist understanding of the universe. In short, it doesn’t allow for others to have access to a different truth. It seeks power to enforce its agenda on society. And in its extreme forms, it is willing to engage violence in order to pull this off.
One could argue that a magical worldview is just as unreasonable as a fundamentalist one. Perhaps that is true. But I’ve recently come to realize that reason isn’t my key issue with Christian fundamentalism. It is my concern about the future and wellbeing of the world that fuels my disdain and ire.
Christian fundamentalism claims that Christ is its lord. There’s nothing wrong with making that kind of truth claim. But by making that claim, it declares the standard by which it is to be judged: the life-giving image of Jesus himself.
Christian fundamentalism is not a religion of liberation, but of enslavement.
Christian fundamentalism is not a religion of peace, but of war.
As such, Christian fundamentalism’s attempt at condemning the world only reverses as it condemns itself, exposing it as nothing but a lie born from the darkest recesses of that which we call “human.”