Review: The Path of the Blue Raven 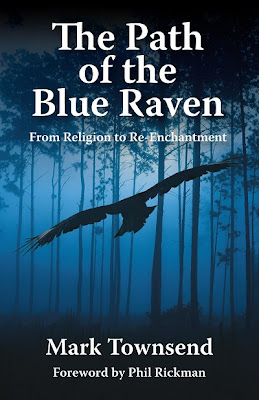 Years back, I read Brian McLaren’s A New Kind of Christian. What a great book for those coming from an exclusivist background (those who believe Jesus is the “only Way” to heaven). Through fiction, McLaren takes his protagonist on a journey through some difficult theological questions that come with living in our world. The most obvious, of course, is how could a loving God could send all those loving people to burn in hell for all eternity just because they didn’t “believe” in Him? The journey is one of expanding horizons, a journey that portrays literarily the natural transition from exclusivism to inclusivism (the perspective that holds Jesus above others, but still makes room for them) that happens as we grow spiritually. Unfortunately, those unable to see past an exclusivist perspective will not be able to handle McLaren’s book.

More recently (and to the point), I have read Mark Townsend’s The Path of the Blue Raven: From Religion to Re-Enchantment. Townsend is an ordained priest in the C. of E. He is also a stage magician. He had always included his stage magic in his religiosity, but eventually his understanding of magic changed. Through experiential reflection and encounters with others of a more nature-based religious perspective, he grew into one who found magic (and I don’t mean stage magic) to be truly a part of everyday life, indeed to be life itself. This growing awareness has led him to become a Druid.

His transition from parish priest to Druid has been one of liberation. The context of his spiritual practice in the church was one of dogmatism and highly institutionalized religion. The context of nature, in contrast, was one of freedom, excitement, wonder, and awe. The journey (as the subtitle aptly describes) followed a path from religion to re-enchantement. No longer serving a parish for the C. of E., Townsend reflects on his sense of call and purpose saying, “Now, however, I do not have an institution telling me how to behave or how to do this or that ritual or blessing. I still miss it, immensely, but I am freeer, happier, more myself and more a priest than I ever was.” (p. 120)

It seems that what McLaren does for exclusivists, Townsend does for inclusivists as he helps them to connect to a pluralistic perspective (one that values all religious perspectives). To conclude his book, he adds several stories of others. Those voices include Christians who values a pagan perspective, Christo-Druids, and Pagan Druids.

I thoroughly enjoyed this book. Townsend’s journey is, in many ways, reflective of anyone’s journey as they grow beyond a parochial religious perspective. And its prose continually invites deeper engagement. I highly recommend The Path of the Blue Raven for anyone interested in learning more about an ever-expanding, personal, progressive religious perspective.

A bonus tidbit that came with this book was an introduction to the Ceile De community. I’ve enjoyed browsing through their site. It’s definitely worth taking the time for a look-see.